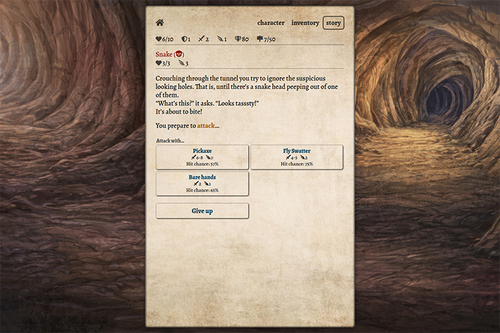 Never thought it would really happen, but now it is: the trello board is getting empty. That means Path of Adventure is getting close to release! I'm guessing this will be the last update before the final release.

I thought a text-based game really deserves a better story than what was there. So I expanded the backstory a bit and integrated it more into the game. Certain events, like the boss fights, have a reason for why they happen and push the story forward. There's also a little side quest that involves collecting certain items granting a great reward at the end.

With the basics added in the previous update, I've added the remaining parts needed to play the game with different characters. Characters bring their own starting stats and a unique item: a magical ring that grants a great power. Upon completing the game the next character is unlocked. This way I hope the game offers greater replayability.

Yes. I want to at least try to make some money out of this whole endeavor, which is taking almost 7 months now. I don't expect it to make me rich, but how awesome would it be to be able to make a sequel? I'm already overflowing with ideas! So, the monetization. It's going to be a free2play game with only a couple of microtransactions:

The prices are really just an idea and I'm keen to hear what people think of them. So please share your thoughts! 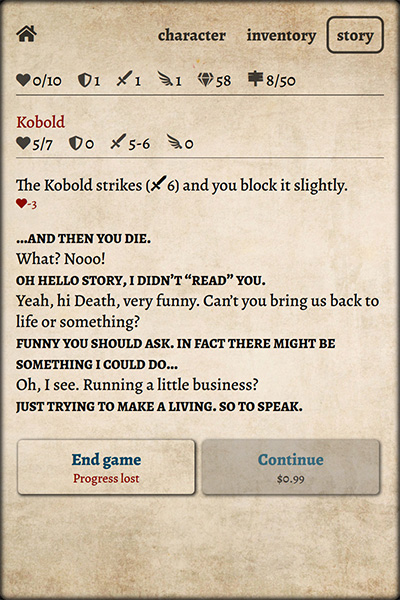 Thanks for reading and hope you enjoy the game. If you have a thought about any of the updates, feel free to leave a message.

Does the continue cost $0.99 every death?  Or, is it a one time payment that unlocks the option to continue?

I don't like the continue idea, mainly because I think perma-death games should stay that way .  But, I do like the idea of $1.99 per character.

Maybe you could add certain perma-buffs/items that could be available at the beginning for a cost (e.g. $1.99 allows you to also  start with a random spell every adventure, or $1.99 unlocks such and such an item to begin with every adventure.

I have a lot of ideas from playing a lot of different rpg's, but I don't know if you want to hear a bunch of them.

I really enjoy this game, though.  I found it last week and have played probably about 30ish runs; I've only made it to 36 on the path

The continue/resurrect option works only once, but can be bought multiple times. I understand why you don't like it and I like the perma-death aspect of the game a lot too. It's just that I'm experimenting with this whole IAP business and this is one of the ideas I had. Sometimes you just make a stupid choice and wish you could get a second chance. Also, I'd love to hear your ideas about IAP's or the game! I can't promise I'll add them in though, as I'm wrapping up the game for the Android release at the moment. But please do share 'em :)

Wow, 30 runs, that's a lot! Glad you like it! I've heard from many people that around the second boss it gets really hard, so I'm going to tune that down a bit there. Ideally, you'd finish the game after a couple of runs and in that way unlock a new character that's a bit harder to play. It should be challenging for sure, but not feel like it's impossible.

The difficulty right now doesn't bother me.  I think more item drops from monsters or finds would be better than lowering the difficulty.

I don't think people will be willing to pay $0.99 for every continue, especially if the die twice in one run (that would frustrate me).  But, permanent unlocks are definitely a plus like: starting at level two, unlocking a specific spell, item, or weapon that could be used at the beginning of each run.

There's also the possibility of leaving the characters items behind from the last run as a possible loot, like in Dark Souls games.

There are two games that I have seen apply the Fallout percentages aspect (i.e. accuracy and damage differing against upper, mid, lower or specific body parts).  I've always found that fascinating.

I don't know if you've played Buriedbournes, but I think a lot of what that game has can be learned from for these types of Roguelite RPG's.  I mainly don't play that game because of the crude graphics; which your game has eliminated.  Since you're wrapping up the game for the Android release, it makes my suggestions a bit difficult because many could require a bit or coding (which I know nothing about) or change that you may not want.  It depends if you view this game as a living model that you will continue to update and grow, or if you just plan to put it out there and let it be.

Also, I did notice some grammar and clarity errors in the writing.  If you are interested, I would be willing to go over your text to clean it up as I am starting a freelance proofreading/editing portfolio, and I have an English degree.  Either way, I thought I'd make the offer.  Thanks for getting back to me.

Yeah, I was thinking about lowering the difficulty by means of monster drops (maybe each boss drops an Elixir of Growth...?) or increase the stats for the first character a bit. The monster stats will stay the same, I've already spent too much time tweaking them anyway ;)

You could be right about the resurrection IAP. But since I've already implemented it and don't see any harm in leaving it in, I'll push on with it and see what it does. My initial idea was to let the player buy credits and have more of these kind of small services that cost only a few credits. Permanent unlocks might be a good option too. I'm just a bit scared it will turn into a pay-to-win model which I want to prevent.

I hadn't heard of BuriedBornes, but I just watched a video and it looks very interesting! Thanks for dropping that. There're not that many turn-based RPGs like this so it's always interesting to see what game designers come up with. About Path of Adventure, I've worked on it for 7 months now and I'm running out of time (and food :P). So I'm putting all the things I want to try out on a huge todo list and release the game pretty much as it is (I'm still adding a couple of events and stuff like that). I think PoA was a good first shot for me at making a text-based game and I've learned a lot from it. I will update and support it for a while, but save the bigger design ideas for future games. I have already got some cool ideas for other games like this. For example, I'd love to ditch the linearity of the path and make it more like exploring a world.

Sure, I'd like that! I'm sure there's a lot of room for improvement, as I'm not a native English speaker. If you drop me an email we can discuss it: jordin [at] keeweed [dot] com. Thanks!

I don't know about the prices (not an opinion, I mean I literally don't know enough about monetization to know if they're good or not) BUT you should probably make it clear on the continue / screen what happens if you continue!! Do you get resurrected back to full life?? Does the current even restart?? Do you get a new random event??

Hi Mono, good point! I should definitely do that! What happens is, your full life is restored and poison is cured, then the game continues like nothing happened. But I agree that's not clear at all.