Right from when I started Path of Adventure I knew I wanted combat with depth. First there would be ordinary weapons, doing ordinary things like attacking and defending, but that would just be the start. On top of it there was going to be awesome stuff. Special powered weapons, mysterious items and “something” with magic...

Making that basic combat system though, proved a huge challenge. It would never work like I envisioned; too flat, too complex, too slow, too frustrating… Every now and then I go through my git commit messages and the number of ‘more combat tweaks’ is crazy. It took so long to create a combat system with just normal weapons, that the idea of adding items and magic became a mirage in the distance.

At least, up until this week. 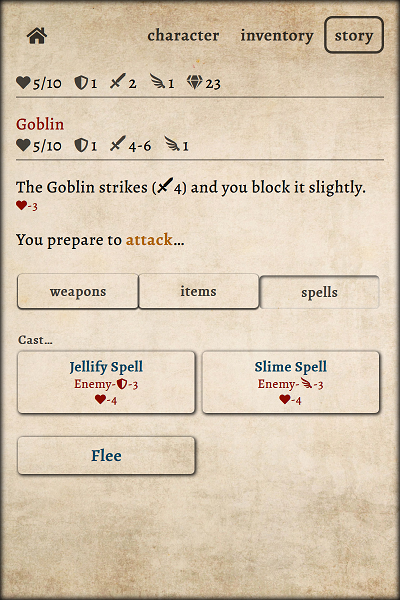 With the combat finally saying 'click', I caught momentum and added both long wished-for features in a matter of days. I made it so that stats can be modified temporarily. With the right potions you can boost them. Facing falling rock? Boost Defense, or Speed. Spider webs? Take that Attack +3. Spells do it the other way around: they add penalties to the stats of the other party. Time to Jellify that Troll and his thick skin!

What about the cost of magic? I went a little controversial here and made casting spells cost Life. On top of that, the cost for casting a spell is decreased every time you cast that spell, eventually becoming free. It’s a first step in adding tension between short-term and long-term rewards. I have plans for more and hopefully that will add a layer of strategy to the epic quest of Adventure.

Thanks for reading! If you had a try on the Path, please share your experience :)